Bajirao Gawai, the founder of the Panchsheel Adivasi Ashram School, worked until 2013 as an administrative director in a mission hospital in Padhar, a small village in the state of Madhya Pradesh.
Since it’s foundation, the hospital has been in a lively exchange with European, especially German medical students and doctors (Friends of Padhar).

Mr Gawai, even from poor backgrounds, had already an old vision together with his wife Sheela to improve life for the impoverished children of India and thus the situation of the Adivasi in the long term. 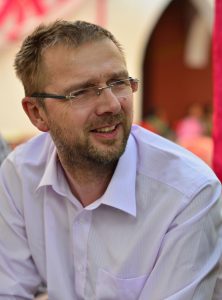 So it was that in 1985 the young medical student Stefan Gemen visited the hospital in Padhar. He understood immediately well with the administrator, who invited him to his home, and finally told him about his dream. Stefan Gemen was enthusiastic about the idea, but he also came from simple circumstances and wondered how such a project could be financed. After he visited the hospital with his girlfriend Claudia once more, the idea arose, to collect money on the planned wedding of the two. Traditional gifts such as porcelain or silver cutlery weren’t needed by the young student pair at the time, and so Bajirao Gawai could be provided with the collected money, who got closer to his idea – education for the poorest.